This post was written and supposed to be published on 23th pf February. But then war began and suddenly beer was not on the radar. But my fantastic, amazing, extraordinary industry is reaching out to help, and asking what is this beer about? 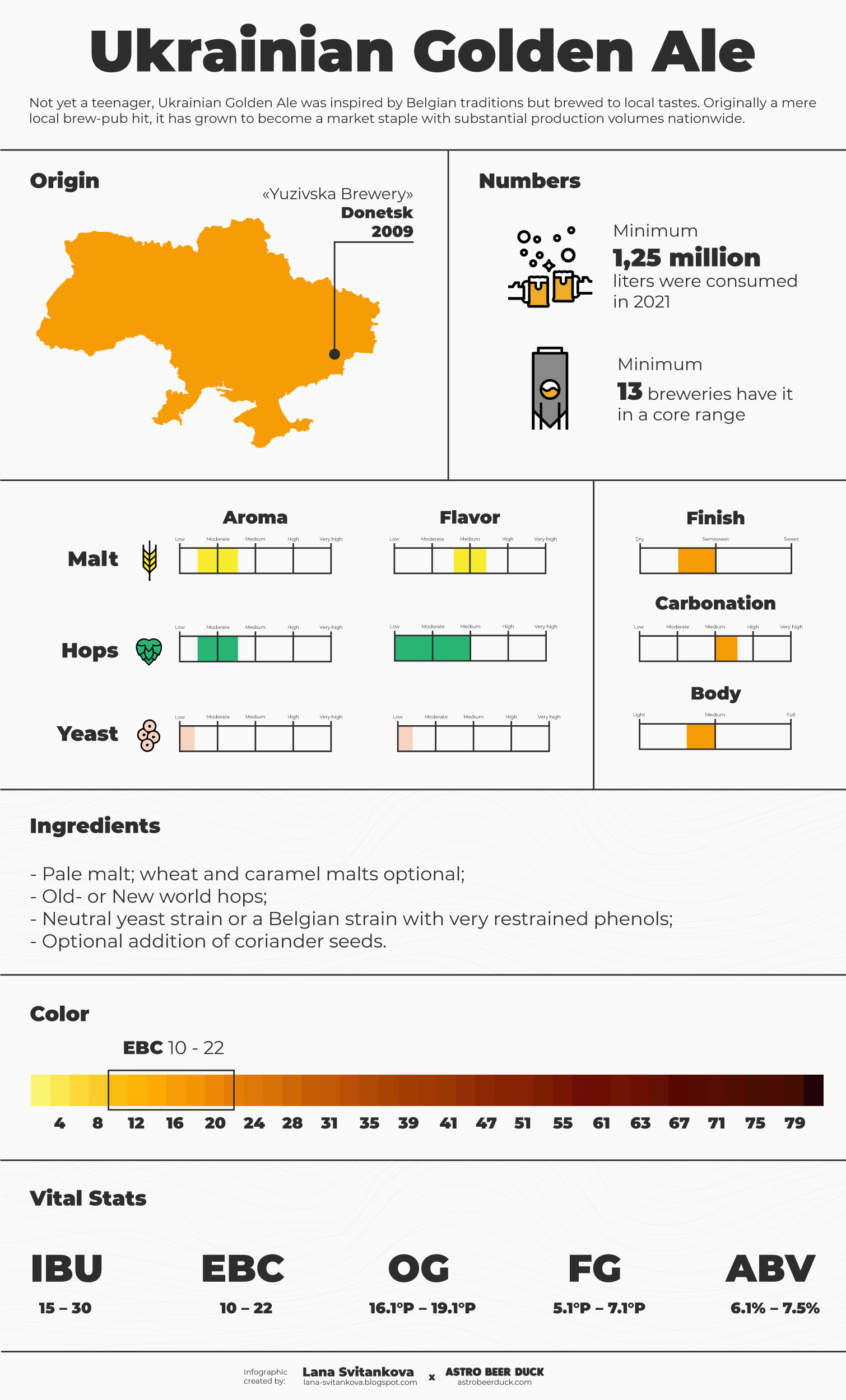 Here is the link for full-sized infographic and description of the style.
And here's a quick comparison of Golden Ales

You know what, my international beer friends, the conversation about Ukrainian Golden Ale has been running for quite a long time. It isn't craft enough for some, while others say it doesn't have any explicitly Ukrainian ingredients (although coriander has a significant share of the total export of the country). Some critics even say it is patently a low-quality execution of Belgian Strong Ale. However, it indisputably has been a big part of the new wave of Ukrainian beer since its inception.
The first example of Golden Ale (what may be considered the prototype) was brewed in 2009, preceding the first Ukrainian breweries to explicitly call themselves "craft" by three years. While the modern craft beer scene is now developing apace, Golden Ale is still alive and kicking, enjoyed by Ukrainian drinkers in great volumes; just last year they drank more than 1,25 million (!) liters. Not bad for a country without a long tradition of beer drinking. Golden Ale (still missing its localizing adjective) is currently labelled under various styles and names by breweries across the country.
So, what is a Ukrainian Golden Ale? It is neither Belgian Golden Strong Ale nor British Golden Ale; it has some similarities to both, yet is a Golden style all of its own. The people who brought it unknowingly into the world are Vasyl Mikulin and Dmytro  Nekrasov: way back in 2009, when the beer was brewed for the first time at "Yuzivska Brewery" (Donetsk, Ukraine). As Dmytro recalls, he was a fierce champion of the Reinheitsgebot and an aficionado of German beer. It was unthinkable for him to add anything to beer except the core four ingredients. At the same time, Vasyl kept pestering him to broaden his horizons and explore the wider world of beer. And what better place to do that than the Funfair of the beer world, Belgium!?
So Dmytro went, and, oh boy, did it open his eyes. Perhaps not to the point where he was ready to add brewing sugars to wort, but coriander seeds seemed fairly acceptable. The first batch featured a malt-only grist, British-style yeast, light hopping, and coriander seeds. The resulting beer had a full body and lingering sweetness in the aftertaste, was very hazy, and a whopping 7% ABV. Bear in mind that this was being served in a brewery restaurant, and that literally no craft beer existed at that time in Ukraine; beer drinkers were drinking mostly lagers. This new-fangled Golden Ale was something of a revelation.
After the invasion by Russia in 2014, Vasyl and Dmytro had to leave their homes, the business, and the brewery behind, starting anew in different places. They took Golden Ale with them. Time passed. Being very accessible and agreeable to local pallets, Golden Ale became something of a stepping stone or gateway from mass-produced lager into "other beer". It was a mainstay at venues that wanted something different, but weren't ready for full-on craft immersion, and in the emerging beer-festival scene. Popularity with consumers caught the attention of other breweries, and the style began to spread across the country, changing somewhat in the process: losing the haziness to improve shelf-stability and shaking off some of the sweetness in favor of balance.
An obvious question is how this elephant in the room (and 2021 wasn't even a particularly good year for the Ukrainian beer scene) could remain so unnoticed internationally. Pretty clear; it is a black elephant in a dark room. Since it is an outlier, it is difficult to enter it into competitions. Since it is accessible and lacks a wow factor, there is no point in taking it to invitationals (this may change in coming years, as classic styles are experiencing a renaissance). And, since Ukraine is not a part of the EU, export would be a no mean feat. As a result, Ukrainian Golden Ale has been a locally confined treasure.
Some may laugh at and deride that last point. The style still has obstacles to overcome to be recognized even in its homeland. The belief that imported goods are better by default still haunts people many years after the fall of the USSR. Younger folk always want the latest and trendiest things, a never-ending carousel of discoveries. And imposter syndrome is always lurking in the shadows; how can we, Ukrainians, claim the style of beer our own? We are not a classical brewing country with centuries of brewing history. We are not the US, driving innovation and new research. To be honest, I wasn't even sure about what to make of it myself. I kept watching it. It has never gone away like some fads. And, even if some geeky audiences turn their noses up at it, people drink it and love it. So, in 2021 the Association of Independent Breweries, together with beer enthusiasts, began the process of making the style official. It involves getting it approved as a local style by the BJCP, raising awareness in Ukraine, unification of labels, arranging international collabs, etc. It is a long road, and we have a long way to go... but we are hopeful. We need more Golden and more Ukraine on labels and taproom boards.